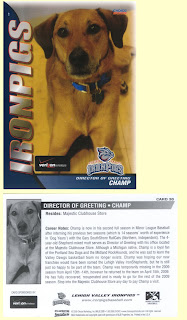 If you live within a few hours of Coca-Cola Park in Allentown, Pennsylvania, I'd highly recommend a night at the ballpark, rooting for the hometown Lehigh Valley IronPigs. The 'Pigs are the Phillies' AAA affiliate - the last rung on the minor league ladder before reaching the big leagues. We attended the double header last night and had the opportunity to meet the team's Director of Greeting, Champ.
If you read Champ's biography on the back of his card, you'll see he's had an eventful few months. For this reason, and because he was kind enough to take time out of his busy schedule last night to say hello, I decided to feature his card from the 2009 IronPigs' team set. (Chachi also felt strongly about featuring Champ on the blog).
Other notes from last night's double header:
- The IronPigs won both games of the double header for the sweep.
- For some reason, Kyle Kendrick was sitting behind home plate (in his street clothes) charting IronPigs' pitcher Gustavo Chacin's pitches with a radar gun.
- We were fascinated watching the interaction of the players' wives/girlfriends and their children in the section behind home plate.
- I'd recommend the Big Porker sandwich, while Jenna recommends going with the Boss Dog.
- Phils' top prospect Michaal Taylor started his first AAA game in Game 1 and hit his first AAA home run in Game 2.
- We wandered over to the outfield during Game 1 and watched Jack Taschner warm up. If Jack reads this blog, he'll remember I had trouble finding a good picture of him for his 2009 Chachi card.
Posted by Jim at 2:46 PM

Email ThisBlogThis!Share to TwitterShare to FacebookShare to Pinterest
Labels: 2009, Champ

I had fun meeting Champ!