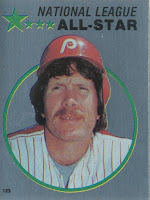 - Watching several early to mid-'80s All-Star Games in Sea Isle City with my Pop-Pop. The games were most likely proceeded by a little skee ball, a few rides at Fun City and ice cream. I rarely made it all the way through these games before going to bed in the front bedroom or in the attic bedroom, depending who was staying at the house that week.
- From the early '80s to the early '90s, lining up baseball cards of all the players involved in the game. I'd set the NL and AL line-ups, adding and subtracting cards of players as they entered or left the game.
- Furiously trying to figure out the new-fangled VCR as I attempted to video-tape the 1986 All-Star Game. I still have tapes (including commercials) of all All-Star Games from 1986 through the mid-'90s, unless my sister Carol mistakenly recorded a New Kids concert over one of them.
- Sitting in a hotel room in Hagerstown, Maryland during the rain-delayed 1990 All-Star Game in Chicago. The game was delayed at the outset by rain and the seventh inning was interrupted by an hour-plus rain delay. The rest of the family was snoozing as I sat a few inches from the TV screen, volume all the way down, waiting for the game to resume.
- Attending the 1996 All-Star Game with my Dad, sitting in Section 615 at the Vet, and convincing him to stay to the bitter end.
- Keeping score (yes, at home) for every All-Star Game since 2001. The games held in NL parks are a pain as the pitcher never bats and pinch-hitters dominate the score sheet.
- Over the last few years, having Jenna prepare an All-Star Game feast, consisting of various flavors of Doritos and random frozen appetizers, all of which are extremely bad for you, but absolutely delicious.
Posted by Jim at 8:00 PM

Email ThisBlogThis!Share to TwitterShare to FacebookShare to Pinterest
Labels: 1982, Schmidt

Wow, great post. Like you, I can literally give a distinctive memory of every All-Star Game since 1979.

I used to host an All-Star party every year from 1989 until 2004. I attended the 1994 game and the 2005 game. As the Hank Williams song goes "all my rowdy friends have settled down." Now enjoying the All Star Game with my kids who are doing exactly the same thing with the cards that you and I did 30 or so years ago.