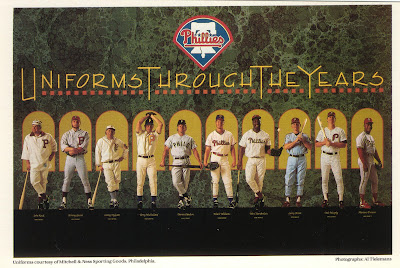 On the afternoon of April 7, 1992, the Phillies were playing the Cubs and introducing their new red pinstriped and blue accented retro-themed uniforms in their home opener. The maroon pinstripes and accompanying bubble "P" logo with the baseball in the middle had been burned into my brain since I was a wee lad. I was now a senior in high school. I wanted to see the new fancy uniforms in person. I needed to be there. So a few friends and I got tickets to the game. That in itself was not a bad choice.

Before heading to the game, we decided to stop by Wawa to pick up snacks. Not a bad choice per se, but probably not a wise choice. Things began to unravel for us when the secretary from the vice principal of discipline’s office was also in Wawa picking up her morning coffee.

Seeing as we were already blatantly guilty of truancy, some in our little group (the guilty shall remain nameless) thought it would be amusing to ride by our high school on the way to the game, horns-a-honking, waving and yelling out our sun roofs. This was a bad choice.

In retrospect, I’m still very glad I went to that game. Even though it resulted in a few days of in-school suspension, it was incredible to see those shiny new uniforms in person. Also, it was one of the best memories I have from the latter part of my senior year of high school, spent with good, good friends with whom I’ve unfortunately lost touch. (Seriously, these were a great bunch of guys).

The Opening Day giveaway was a poster (reproduced here in the Phillies’ annual team issued card set) depicting current players wearing different Phillies uniforms through the years. This poster has hung on one of my walls wherever I happened to be living from 1992 until now.

Change was in the air in 1992. The Phillies would finish last in the NL East and I found myself on foreign soil in North Carolina. The following year would be much better.
Posted by Jim at 11:41 PM

I like this one and the one I made for the 2008 World Series team - mainly because you and Doug are in that one!

I have this poster autographed by each player ... cool memorabilia.