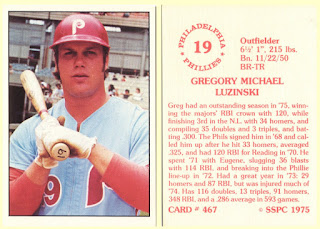 Flipping through an album of my older Phillies cards on Sunday, my Dad came across a set he hadn't seen before. I explained it was the 1976 SSPC Phillies team set and that not a lot of people knew about it since the set was pulled from circulation as a result of legal problems. "That would make a good post for the blog," he said. Agreed.
The 630-card set was produced in 1975 by the Sport Star Publishing Company, but not released until 1976. The cards were numbered by team, with the Phillies comprising cards 456 through 476. (A few Phillies prospects show up at the end of the set). One card I don't have from this set, that I'd like to eventually track down: card #622 features former Phillie Dick Sisler as a coach for the San Diego Padres.
Did You Know?: According to Beckett's 16th Baseball Card Price Guide, "The card backs were edited by Keith Olbermann, prior to his ESPN broadcasting days."
Posted by Jim at 2:35 PM

Email ThisBlogThis!Share to TwitterShare to FacebookShare to Pinterest
Labels: 1976, Luzinski

That would be a cook job to edit the backs of cards...although being on ESPN must be cool too.

Some might argue Keith should have stayed with ESPN.

Keith should be the susttute night anchor in Alaska

Keith would have trouble with Quinn Broadcasting in Millville

Keith is great where he is calling out the Neo-con conservative Nazie right-wing nut jobs.