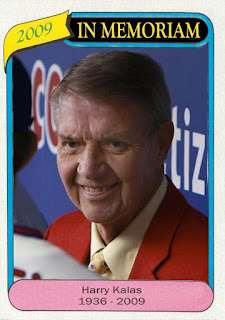 Harry Kalas passed away today, at the age of 73. Very, very sad, but at least he's back with Whitey again. As already discussed here, like most baseball fans growing up in this area, Harry and Whitey and the Phillies were a huge part of my summers. With the exception of my parents and my sister, I've probably heard Harry's voice more often in my 35 years than anyone else's voice.

As my Dad told me, "He lived a full life and he died with his boots on".
I have so many memories of Harry Kalas . . . He announced my name before I took batting practice with the Phillies in the summer of 1982. I was in North Carolina in 1993 when the Phillies clinched the N.L. East and my parents held the phone up to the TV so I could listen to Harry call the final out against the Pirates. I was there when he revealed the #1 on the outfield wall for the Vet Countdown and he gestured up to the heavens to his long-time partner. The poem Harry read during his Hall of Fame induction thanking all Phillies fans is framed and hanging on my office wall. And Jenna and I were there last Wednesday when Harry threw out the ceremonial first pitch before the game.
I came home from work this afternoon to watch the game and to play with Doug. We were playing with his cars when they replayed Harry calling the final out of the 2008 World Series. Doug looked up from his cars as he heard the familiar voice announce Brad Lidge's strikeout of Eric Hinske, and he smiled. He looked at me, still smiling, and said, "Go Phillies!" Thank you Harry.
Posted by Jim at 2:34 PM

He will be greatly missed by the Phillies fans and community.

Harry was part of the soundtrack of summer. No Phillies coverage will ever be the same.

Thank you Harry, thank you Whitey, thank you Phillies, thank you batting practice on 12th Street...thank you Doug...get ready for some high heat from your Dad.