There were snow flurries in Philadelphia on April 5, 2007. The Phillies were playing the Braves in the 3rd game of the new season in a 3:10 Thursday afternoon game. According to the official box score, the game time temperature was 43 degrees with a 24mph wind blowing from left to right. I should have been at work, but I was at the game.


In the bottom of the 8th, facing the Braves' Tyler Yates, Wes Helms sent a high, majestic foul ball into the third level of Citizens Bank Park along the first base line. The ball was heading for my section. It was snowing. The only people remaining in my section at this point in the game were me and two older ladies a few rows behind me, huddled under a large fleece blanket. This was not their foul ball. Oh no my friends, this was not their foul ball. 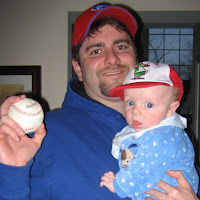 The ball landed a few rows behind me. Through the snow and wind, I lunged over the seats, grasping for the ball. My hand closed around the ball and I held it aloft to proclaim to the masses that this foul ball was now mine and mine alone.
The two older ladies, still under their blanket, politely clapped. I triumphantly sat back down in my seat, but not before tipping my cap in their direction. They never had a chance.
Posted by Jim at 10:09 PM

I thought you were working at 3 PM...but you didn't have to push the ladies out of the way.
As the years pass, embellish the story a little bit...back hand grab etc.

I think I'll add more people to the section when I retell this story.