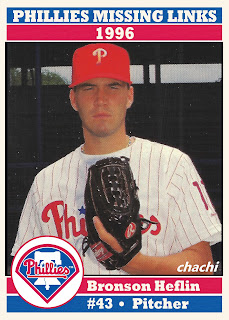 On August 1, 1996, the Phillies purchased the contracts of two players from Triple-A Scranton/Wilkes-Barre, adding them to the 40-man roster.  In need of a pitcher and a position player, the players purchased were prospects Scott Rolen and Bronson Heflin.  Rolen would win the Rookie of the Year Award in 1997 and go on to be a seven-time All-Star and an eight-time Gold Glove winner.  Heflin would appear in three games in relief for the Phillies, only to be optioned back to Scranton when the Phillies needed a starting pitcher and Matt Beech was recalled.  Those three games were to be the only three big league games of Heflin's professional career.

Heflin pitched in 1997 and part of 1998 in Scranton before moving on to the Cardinals and Pirates organizations along with a stint in independent ball between 1998 and 2000.  It's strange the Phillies didn't bring back Heflin for a return trip to the majors in 1997 when he appeared in 35 games for the Red Barons with an impressive 2.28 ERA.

Phillies Career
3 games, 0-0, 6.75 ERA, 6 2/3 innings pitched, 4 strikeouts
Acquired:  Via draft
Debut:  August 1, 1996 (Game 2) - Pitched the eighth and ninth innings in a 7-1 loss to the Cardinals, surrendering a solo home run to Ron Gant.
Final Game:  August 7, 1996
Departed:  Left the Phillies organization at some point during the 1998 season and signed with the St. Louis Cardinals organization.