On Sunday, Doug and I attended the Philadelphia Sportscard & Memorabilia Show in Valley Forge. Doug had actually saved Christmas money for this show and he's spent the last few weeks preparing his checklists.  We had a fantastic day, and I'm OK with the fact that Doug came away with way more cards than I did.  I'm always grateful to those dealers that give Doug some extra attention, especially when they realize that this kid is truly a collector and not just looking for the big hits.

There were four former Phillies signing autographs on Sunday, and Doug admittedly had never heard of any of them.  That being said, we still decided to buy four autograph tickets so that he could at least meet them and add to a growing autograph collection.  I'll have a separate post coming up to show off our new autographs.

Doug was very happy going through the bargain bins and he added a small stack of vintage (1970s is vintage to him) Hall of Famer cards to his collection.  He also came away with a bunch of newer Phillies cards and some more Mike Trout cards for his growing player collection.  He's within a few cards now of completing his 2016 Topps Opening Day set, and he needs just one more card (Johnny Bench) for a complete 2016 Topps Bunt set.  Not to leave out his brother Ben, Doug hunted down an autographed Ben Revere card and a signed 8 x 10 photo of Revere for his brother's collection.

While we weren't adding cards to Doug's collection, I managed to add a bunch of cool cards to my collection as well.  The "newest" card I brought home was from 1971:

It was truly a fantastic day and we're already making plans for our next big baseball card show outing! 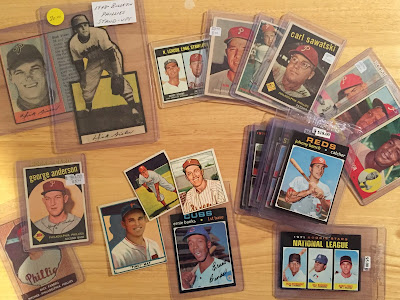 That's quite the haul! Love the variety.

I'm pretty certain I have that Bench Bunt card - I'd be happy to send it your way. tonyburbs at gmail.com

Sounds like both of you had a nice haul! I wish I had emailed you beforehand as I went Sunday too. Doug is a year or so older than my son, and he didn't feel going because "You never let me buy things at the Lego stand." I need to entice him more to the baseball side of collecting.... Also the Lego stand wasn't there at this show.

I picked up the 2016 Topps factory set for the young man's birthday (fortunately he doesn't read this blog!), a few early-2000s Phils programs that I didn't have, a partial 1957 Phillies Jay Publishing set (needs 3 players), about 5 SGA bobbleheads (both 2015 Bowa variations, 2009 Manuel, 2016 HK statue and a Cliff Lee a tire figurine), some 9-pocket sheets, a few Heritage unopened packs I needed for my collection, some Philly team pocket schedules I needed, 2 of the 4 Hostess Phillies cards I need (still need 75 Cash and 79 Luzinski), and my favorite purchase--the 1983 Phillies Centennial pitcher sponsored by Roy Rogers plus 2 more glasses (to add to the 4 I have)! Cheap at $20 too.

I looked at some early 1940s Phils programs but decided to pass until maybe the December show (if they didn't sell) as I didn't have my detailed list of programs with me and didn't want to buy duplicates. I also considered buying a few of the R-Phils gold bobbles but I am still not sold on the idea of golden bobbles.... They look better in actual life colors.

I had Von Hayes sign my 1983 team ball. He was very friendly and talked about his coaching in Mexico (he is with his second team there).

We probably just missed each other! Sounds like you had a good day too.