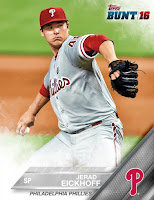 One Sentence Summary:  Wearing their patriotic uniforms, the offense exploded for seven runs in the second inning and Jerad Eickhoff struck out eight in this 8-2 Phillies win.

What It Means:  Our week-plus long vacation to Hawaii is over and we're all very, very tired.  This was our first (and hopefully not last) trip to Hawaii, and it was by far the best family vacation we've ever experienced. Over the next few days, I'm going to go back and catch up with the game summary posts that I missed while we were away.

Featured Card:  After exchanging a few e-mails with fellow collector Burnell, I decided to give Topps Bunt a try.  Topps Bunt is the card-trading App that allows you to acquire, trade and collect various digital Topps cards and house them in your virtual collection.  I was skeptical at first, but after playing around with the App for the past few weeks I can see the merits of it.

While I could spend money within the App to boost my collection, I haven't yet and I won't.  Burnell traded me a bunch of his Phillies doubles, including the card featured here.  Topps provides enough daily coins to allow me to open a few virtual packs a day, and they throw in some "free" cards on a mostly daily basis as well.  While it will never replace the joy of opening an actual pack of baseball cards, opening a virtual pack of cards is still fun.

Not surprisingly, my oldest son Doug loves the App and it seems as if Topps has wisely developed this platform in an effort to attract and retain younger collectors.

It you're interested in trading with either of us, my fan name is R1NGO73 (that's a 1 and not the letter I) and Doug's is DOUGP06. As expected, we're mostly interested in Phillies cards although Doug will take whatever Mike Trout cards come his way.

Email ThisBlogThis!Share to TwitterShare to FacebookShare to Pinterest
Labels: 2016, Eickhoff