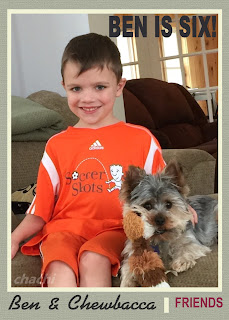 Leading up to this day, for the past six or seven months, Ben has reminded me on (at least) a weekly basis that he'll need a new "Ben is Six!" card for his collection when his big day arrived.  Well today is Ben's sixth birthday, and as promised I've made him his very own, limited edition, custom Ben is Six! card.  He wanted to share his card with his good friend, Chewbacca Chachi.  (Yes, that's our dog's name and he refused to be photographed without one of his toys.)

Ben continues to enjoy playing soccer and he recently started tennis lessons.  He's also the only six-year-old I know who taught himself all the names of the presidents and the 50 states and their capitals.  Ben has taken up an intense interest in gardening, which should result in some tasty fruits and vegetables in a few months.

I'm so incredibly proud of this kid, and I can't wait to see what he does next.  Happy birthday Ben!