Over the past few years, I've fallen into a pattern with these Topps Phillies posts where I ignore them throughout the year and then I rattle off a few years during the Phillies-less postseason.  The patten continues again this season.  While trying to stay up for Game 1 of the Dodgers-Mets N.L.D.S., I somehow found myself flipping through my 2013 Phillies binder.

The wheels completely fell off the Phillies in 2013 as they endured their first losing season since 2002.  Manager Charlie Manuel was dumped in mid-August right after winning his 1,000th career game and the non-productive Ryne Sandberg era began.

The Set
Number of cards in the set:  Both Series 1 and Series 2 have 330 cards with #7 once again omitted in honor of Mickey Mantle.  As such, the full set is numbered to 661.  The Update Series once again contains 330 cards.
My very brief thoughts on the set:  I was underwhelmed by the 2013 Topps set when it first came out, and almost three years later I find the set, like the 2013 Phillies season, fairly forgettable.  Night Owl Cards christened the set the "sea turtle set" since the curved home plate and baseball diamond in the bottom left corner vaguely resemble an abstract swimming turtle.  Once you see the turtle in the set's front border design, you can never un-see it.

2013 Phillies
Record and finish:  The Phillies finished fourth in the N.L. East, 23 games behind the Braves, with a record of 73-89.  As mentioned previously, Manuel was dismissed in mid-August and the brief Sandberg era began.
Key players:  Domonic Brown made his first and only All-Star team and he'd finish the season with a .272 average and team leading 27 home runs and 83 RBIs.  He hasn't touched those numbers since. Chase Utley hit .284 over 131 games and was second on the team in both home runs (18) and RBIs (69).  Carlos Ruiz (.268) had a solid year behind the plate while newcomer Ben Revere hit .305 with 22 stolen bases.

Key events:  Looking at the Chachi Highlight cards for the season, the most notable events include Halladay winning his 200th career game and walk-off home runs from Freddy Galvis and John Mayberry, Jr.  Outfielder Casper Wells and infielder John McDonald both pitched in an 18-inning loss to the Diamondbacks in August.

2013 Phillies in 2013 Topps
Who's in:  Series 1 and Series 2 each include 10 Phillies cards, with the Update Series adding 10 more for a total of 30.  There are three short-printed variation cards for Howard, Utley and John Kruk (in the Update Series).

Michael Young's card is baffling, as it features a photo of him scoring the winning run in a thrilling 4-3 win over the Royals on April 6th.  We get a nice look at Young's back and short-term Phillie Ezequiel Carrera is to his left, but Young's face is completely obscured.

Who's Out:  Infielder Galvis got left out of the set for the second year in a row and the entire bullpen, except Papelbon, was ignored.  The top four relievers in terms of number of appearances could have merited cards in the set - Justin De Fratus, Bastardo, Diekman and Jeremy Horst.
Phillies on other teams:  Delmon Young (#121, Tigers) and Michael Young (#320, Rangers) both appear with their former teams in the base set.  Wells (#US247, White Sox) appears in the Update Series as well as the Mariners retail team set (#SEA11).

What's he doing here:  Contreras and Worley both departed during the off-season so it makes sense they'd appear in Series 1 with the Phillies.  As has been the case with the past few years of Topps sets, I really don't have any issues with their Phillies player selections.  Back-up catcher Lerud is a surprising inclusion, as he appeared in three games with the Phillies in 2012 and just six more games in 2013.
Cards that never were candidates:  Galvis, De Fratus, Basardo and Diekman.
Favorite Phillies card:  Phillies Room Favorite Frandsen finally received a Topps card, and the photo is perfect - Frandsen is smiling on his way up to the plate with his filthy, pine tar stained helmet on full display.  Easily my least favorite Phillies card, and perhaps my least favorite Phillies card ever, is Papelon's card showing him in mid-maniacal scream.

Other Stuff
Variations:  There are a few variations to be found in the Chrome, Opening Day and retail team set as shown on the table below.  I'd love to pick the brain of the Topps photo-selection committee and ask them why Revere had different photos on his flagship and Chrome cards, both showing him making a diving catch.  Both Young's received Photoshopped Phillies uniforms in the retail team set. 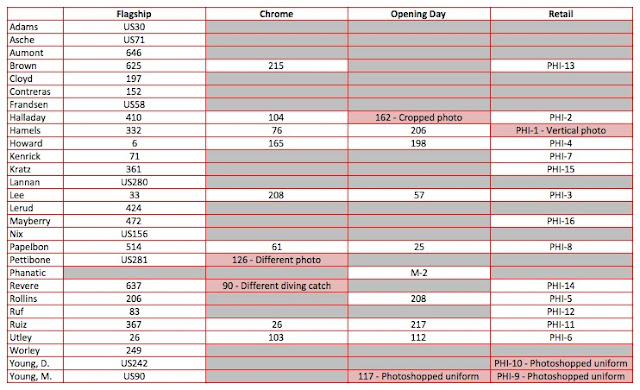 Love that you are still doing these! I've come across a few cards that I've needed that I never knew about. I never understood the new Revere card either, the only reason I saw for him even being in the set was that he had one of the "pray for Boston" variation cards. The only other Phillies card I know of from 2013 that I don't see listed is the infamous Kyle Kendrick "crotch shot". Sadly my collecting ocd forced me to buy the card and add it to the team set.

Keep up the great work on these!

Of course! I forgot about the Kendrick SSP crotch shot card. And I'm ashamed to admit I just did an eBay search for "Kendrick Crotch" to see if prices had come down on the card so that I could add it to my team set as well.

Wow, $300 for a Kyle Kendrick card...something that I never thought I would hear spoken. If I see a cheap one I'll let you know. Also do you get into the Topps Bunt app? It has a Ethan Martin card done in the 2013 style in it. I printed it off and it fits right in with the set.

I haven't ventured into Topps Bunt land yet, but it's probably only a matter of time! I didn't realize they were creating "vintage" cards with prior sets' designs. I may need to check it out.

Ezequiel Carrera shows up in the Update set (#US169) with the Indians.