Description:  The Phillies went with black borders for the first time ever.  The cards have a very basic design featuring the team logo and the player's number, name and position in a digital font.  Other than the 2008 World Champions card, which is my all-time favorite card from a team issued set, there's no indication that the Phillies had won the World Championship in 2008 on the cards themselves.  The horizontal card backs feature biographical information and complete career statistics.

How Distributed:  The original 37-card set was available at Citizens Bank Park throughout the first half of season.  Following the signing of Pedro Martinez on July 15th and the acquisition of Cliff Lee and Ben Francisco on July 29th, cards of Martinez, Lee and Francisco, along with back-up catcher Paul Bako, were inserted into the set.  With the addition of these four cards to the update set, five cards available from the original set were removed - the 2008 World Champions card, along with the cards for Coste, Gradoville, Jenkins and Paulino.

Complete Standard Checklist (37):  The cards are unnumbered, but I've presented them below ordered by uniform number.

Bako wrapped up his 12-year career playing 44 games with the Phillies in 2009.  His card in this set in his sole Phillies baseball card.  Paulino was traded on March 27th to the Giants for Jack Taschner, and never appeared in a game for the Phillies.  He has a second Phillies card in the 2009 Topps Heritage set.

The First Appearance designation is for players who have never before appeared within a Phillies team issued set.  These players may have already appeared on other Phillies baseball cards.  (I'm not counting the semi-rare Matt Stairs card from 2008 as his official first appearance.)

The 2008 World Champions card (see below) features Hamels, Utley, Howard, Rollins, Lidge, Manuel, Madson, Victorino, Werth, Myers, Ruiz and Moyer decked out in tuxedos with red bow ties flanking the World Series trophy.  Gradoville is listed above with the coaches, but he was actually the team's bullpen catcher.

Variations/Rarities:  14,000 Phillies featured a post a few years ago containing a Jayson Werth card I had never seen before.  The card was distributed to kids participating in the team's annual Home Run Derby competition and contains a purple facsimile autograph and the Home Run Derby logo. The card uses a different photo than Werth's regular team issued card.

And as pointed out in a comment from Steve F. in an earlier post, a card was issued for Placido Polanco in the style of the 2009 team issued set.  Polanco was signed as a free agent on December 3rd.

Finally, Rick adds a number of other rarities available in the design of this set in his comment below.  Of most interest to me personally is the blank backed Roy Halladay card, which would be his first official Phillies card.
Rick adds that several cards are available with a 2010 copyright date and a 2009 National League Champions logo on the backs.  I've addded to the list Rick originally provided with a few additional cards I've picked up over the years. 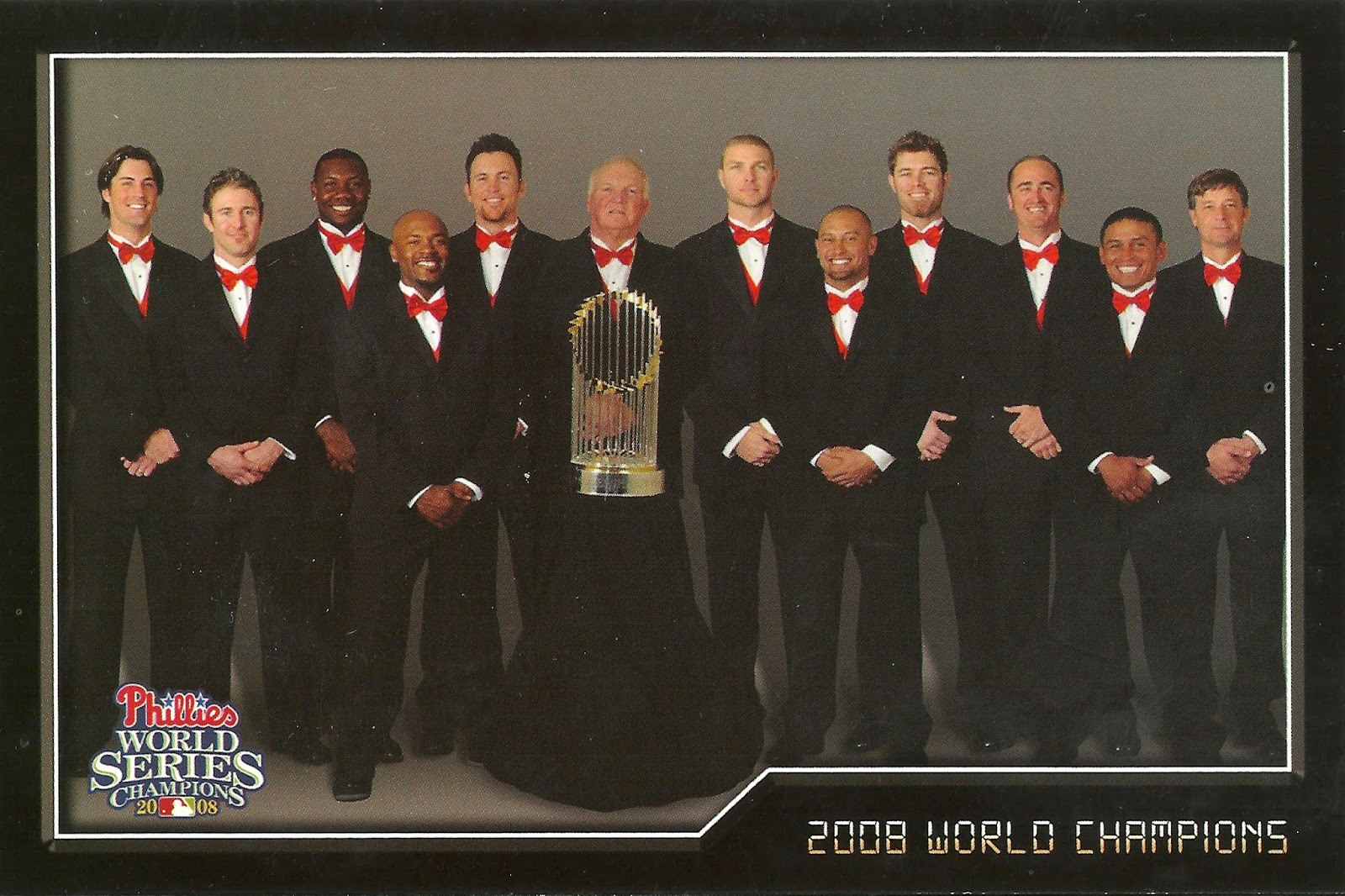 And now it gets interesting. The Phillies had another Meet and Greet signing in the HOF Club and there were cards of Minor League Pitcher of the Year #4 Kyle Drabek and Player of the Year #40 Michael Taylor--both in R-Phils uniforms. There was also a #3 Lou Marson with his 2008 stats on the back. Using the same design on the front there were cards of #27 Placido Polanco and #23 Brian Schneider-both blank backs for a public signing in the Majestic Store at CBP. Schneider's appearance was cancelled because of weather. I went down for the signing and was able to pick up a couple of the cards that were made. There was also a blank back #34 Roy Halladay. Finally, using the same front design there were cards that had a 2010 copyright on the back and the back said 2009 National League Champions. Cards were made for 11 Rollins, 35 Hamels, 37 Durbin, 43 Happ, 46 Madson, 54 Lidge. Happy Hunting.

Thanks again Rick. I've updated the post to include these cards.