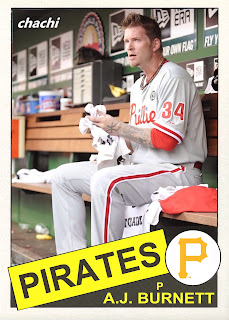 A.J. Burnett's recent signing with the Pirates allows me to play with my 1985 Topps template and make a Pirates card to mark Burnett's return to Pittsburgh.  This is the first of what should be many cards in the 2015 Chachi Departures insert set.

Coming Back
Andres Blanco (11/13/14) - Signed to a minor league contract and invited to spring training.

New Additions
Elvis Araujo (11/13/14) - Signed as a free agent formerly with the Cleveland Indians organization.
Posted by Jim at 7:00 AM