The virtual form of The Phillies Room has been quiet this week as we've been busy building with new Legos, playing new games on our new Wii U and enjoying the company of family and friends.  I'll be back in a few more days to show off some of the vintage Phillies cards that found their way into my collection as a result of my awesome Mom.  Thankfully, she still believes you're never too old to receive baseball cards for Christmas.

The newest Phillies card added to my collection is the Scott Rolen card seen here.  It's nothing special, as it comes from the under appreciated 1998 Upper Deck set.  But somehow this card had eluded my collection for the past 15 years.  I had never even seen the card before until I unwrapped it at my Mom's house the day after Christmas.  For 15 years, I kept an empty pocket among the Upper Deck Phillies team set in my 1998 Phillies binder and it's nice to finally fill the pocket with this card.

And as a sneak preview of what's to come, it's important to note that five of the ten cards on this list (featured on the sidebar) . . . have now been crossed off. 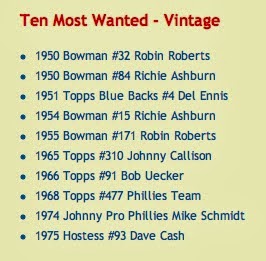 Email ThisBlogThis!Share to TwitterShare to FacebookShare to Pinterest
Labels: 1998, Rolen