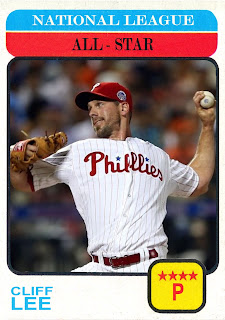 What It Means:  I still love the All-Star Game, and no matter how hard Fox and their broadcasters try to make me not like the All-Star Game, it's not going to happen.  That being said, I made it until the seventh inning until I muted my TV for good.  I didn't listen to any audio of the Home Run Derby.

What Went Wrong:  The A.L. halted the N.L.'s modest three-game win streak by holding the N.L. offense to just three hits.  Mariano Rivera, who is retiring after this season, won the MVP honors after pitching a scoreless eighth inning.

Cliff Lee entered the game in the fifth and promptly allowed a lead-off double to the Orioles Adam Jones.  Joe Mauer then singled to left on a ball that Troy Tulowitzki couldn't handle, but I'd like to think that Jimmy Rollins would have tracked down.  Shortstop J.J. Hardy then grounded into a fielder's choice, scoring Jones and giving the American League a 2-0 lead.  Millville's own Mike Trout then faced Lee and grounded into a double play to end the inning.

Perhaps Lee's best moment came during the pre-game introductions, when he greeted the Citi Field boos with an amazing stare-down.

Domonic Brown's first All-Star at-bat was a blink and you missed it moment.  Brown faced the Blue Jays' Brett Cecil with one out in the bottom of the seventh, and struck out on three pitches.  He was on deck in the bottom of the ninth when Pedro Alvarez popped up to second to end the game.

Featured Cards:  When I chose the 1973 Topps design for this year's Chachi set, I did so realizing the set had no All-Star cards and I was going to need to get a little creative this year.  I decided to go with the design from the All-Time Leaders subset for my All-Star cards, and I'm happy with the results.

Pssst! Dude! The lines on your "Featured Cards" text got jumbled up!

Cool cards, tho. Turned out well!

This only starting happening over the last few months for me. Whenever I upload a photo next to existing text, things get wacky.

Nice design on the All Star card!

The cheers for Mariano Rivera reminded me of the Vet's reaction to Ozzie Smith in 1996. Well done by the crowds on both fronts. (And yes, that is a compliment to myself, as I was there in 1996, as I see you were too from the linked 1996 Topps Phillies entry.)

They look great (as always)!