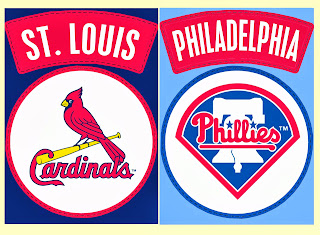 At the Ballpark:  All fans will receive a 2013 schedule magnet tonight and the Phillies host their Jackie Robinson tribute on Friday night.  Sunday is the Phanatic's birthday celebration (is it a little early this year?) with all kids receiving a Time Travelin' Phanatic DVD.

1973 Topps Flashback:  Rick Wise and Steve Carlton were traded for each other in a straight-up pitcher for pitcher deal in February 1972.  Both pitchers received "Traded" cards within the 1972 Topps high series, but the 1973 Topps set contained their first proper base cards with their new teams.  Over the short-term and eventually over the long-term, it's safe to say the Phillies got the better end of the deal.

Wise lasted two seasons in St. Louis, going a combined 32-28 in 70 games and making the All-Star team in 1973.  He enjoyed one of his best seasons as a member of the 1975 Red Sox when he went 19-12 and helped the Sox reach the World Series.  Lefty's first season in Philly marks perhaps one of the best single-season pitching performances in the game's history.  Pitching for a horrendous 1972 Phillies squad, Carlton went 27-10 with a 1.97 ERA and 310 strikeouts in 346 1/3 innings.  His 27 wins represented almost half of the team's 59 wins for the entire season.
Posted by Jim at 6:05 PM

I always liked Rick Wise when he was with the Phils. No more so than when he hit 2 HRs while pitching a no-hitter in 1971.

Then he was traded in the off-season. How dare GM John Quinn do that! (But it turned out for the best, obviously.)

That no-hit, two home run game from Wise has got to be one of the single best one game performances by a player in the history of the game!