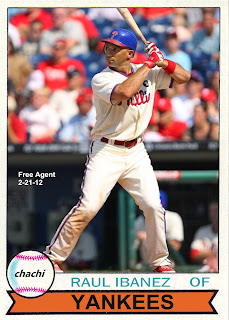 According to the rumors, if the Yankees had preferred to have Bobby Abreu as their designated hitter in 2012 instead of Raul Ibanez, A.J. Burnett would be in Clearwater right now in red pinstripes and Joe Blanton would be getting to know his new teammate, Albert Pujols.  As further proof that General Manager Ruben Amaro, Jr. is constantly working the angles, the proposed deal would have shipped Blanton to the Angels for Abreu and then Abreu would have been spun-off to the Yankees for Burnett.  The rationale for the deal is that Burnett would have been cheaper over two years ($13 million) than Blanton over one ($10.5 million).

Instead, Ibanez officially signed with the Yankees yesterday and everyone here in The Phillies Room wishes him nothing but the best.

Is it OK if I don't wish Ibanez the best?

Yes, that's acceptable. It's always tough seeing guys you really like going to a team you really don't like. At least he didn't sign with the Mets.

That will actually be kind of awkward when he closes out the clincher against the Sox.