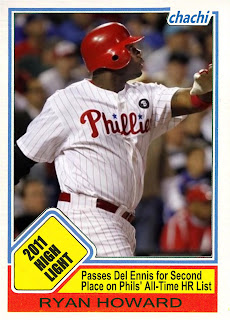 In the fourth inning of Saturday night's game against the Braves, Ryan Howard launched career home run #260 off Braves pitcher Julio Teheran.  The ball landed in the Phillies bullpen.

The home run moved Howard into sole possession of second place on the Phillies all-time home run leader board, passing Del Ennis who hit 259 home runs as a Phillie.  Mike Schmidt is next on the list, although the 31-year-old Howard will need to hit 288 more to match Schmidt's career total of 548 home runs.

Ennis passed away in 1996, but his widow, Liz, passed along a note of congratulations to Howard following the game.