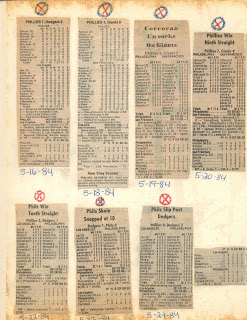 - I wonder how long the boxscore caption writer waited to use the "Corcoran Uncorks" bit. Corcoran bounced all over the field for the Phillies in 1984. He started 34 games at first, 12 games in right and 4 games in left. For the most part, he was the first left-handed bat off the bench for the Phils, appearing in 102 games and hitting an impressive .341. He topped his game total by 1 in 1985, appearing in 103 games, but his average dipped down to .214. Corcoran appeared in 6 games with the '86 Mets and toiled in Maine with the Phillies' AAA club in '87 and '88 before calling it a career.
Corcoran never had an '84 Topps card, so I "borrowed" his picture from his '85 Fleer card and gave it a better home.
- 26 years later, I still wasn't sure what the word "skein" meant in the caption of the boxscore from May 23rd. So I looked it up. I'm still not sure what they were going for here. "Skein" can refer to a loosely coiled length of yarn or a flock of geese. I suppose they were referring metaphorically to the fragile state of the team during the win streak? Thus, the yarn comparison? The only thing that would have made it better would be if it said, "Phillies Skein Uncorked at 10."
Posted by Jim at 12:00 PM

In 1984, the Phillies assumed they were going to replace Pete Rose at 1B with Len Matusek. If I recall correctly, Corcoran got more and more playing time as Matusek continued to prove he wasn't an everyday player. Eventually, the Phillies brought in Al Oliver to give the position some veteran stability.